I love bread. There, I said it. Bread is one of those foods I just can’t get enough of, especially when it’s fresh out of the oven. For some reason, people like to pretend as though bread is no big deal, a behavior reinforced by phrases like “Man does not live by bread alone.” The truth of the matter is that all humans love the stuff way more than they’re willing to admit.

Another strange thing about bread is that everyone thinks it’s hard to make. Yes of course it can be difficult, but it doesn’t have to be. This recipe in particular uses four ingredients, takes maybe 10 minutes of hands-on time, requires zero know how, and costs about a dollar. Believe it or not, bread is one of the very first things I learned how to cook as a kid, preceded only by grilled cheese and pasta. Don’t get me wrong, I am hardly a master baker, nor do I truly understand the science behind what happens when you mix things together and stick them in the oven. What I am good at is finding a recipe or two I like and making them over and over until they come out right. This particular recipe is an improvement over an old one I used to use. It’s sourced from The Merlin Menu, and it has never let me down.

Before we go any further, let’s get this Dutch oven thing out of the way. About half of you reading this post are still giggling just from seeing the title, while the other half of you don’t understand what’s so funny. The phrase “Dutch oven” has a double meaning, you see. The original, more traditional meaning refers to a versatile type of cooking pot. The more recent and far more hilarious definition involves flatulence, bed sheets, and often a very angry spouse. If you’re interested in the details, I’ll let you read about it for yourself. Trust me though, it is pretty funny. 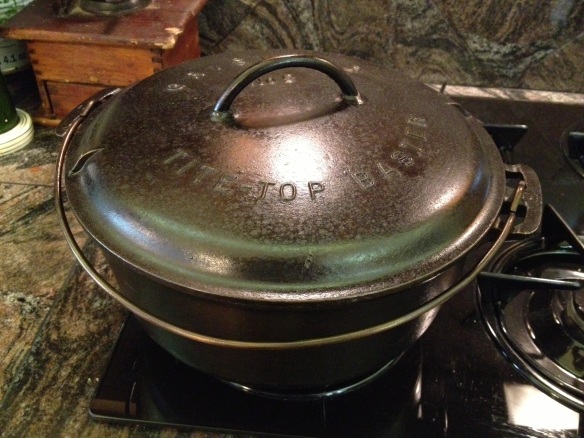 The less amusing version of a Dutch oven.

Back on topic… One of the keys to making good bread is keeping the dough from drying out while it bakes. Professional baking ovens have steam injectors that help create wonderfully moist bread with why-doesn’t-it-turn-out-like-this-at-home crust. Since most of us don’t have professional baking ovens, we’re going to cheat. A Dutch oven (Go ahead, get your giggles out of the way. I’ll wait.) creates its own steam when you bake in it, resulting in amazing bread and humorous recipe write-ups alike. Any type of Dutch oven will do (except the funny kind), but make sure yours can handle temperatures of 450 degrees F. Some Dutch ovens have plastic knobs that will need to be replaced before you try this recipe.

If you have a mixer, attach the dough hook and turn it to the lowest speed. Dissolve the yeast in the warm water (I prefer to mix the yeast with a spoon in a smaller, separate container to make sure it’s fully dissolved) and pour it into the mixer. Slowly add two cups of flour, then the salt, then the final cup of flour. When the dough begins to pull away from the sides of the bowl, it’s done. 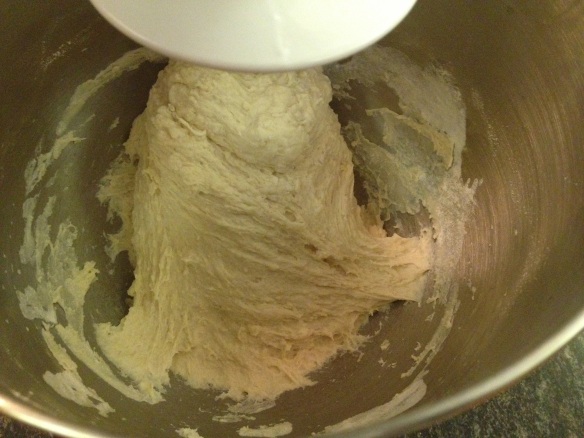 This dough is ready for greatness.

Tightly cover the mixing bowl with plastic wrap and allow to rise at room temperature for six to eight hours. If you want to have this bread with dinner at 5pm, you’d better get the dough mixed by about 9am.

Don’t go too much over eight hours or the dough will sometimes deflate a bit.

After rising, the dough will be very loose and bubbly. It’ll be pretty darned sticky as well, but don’t worry about that. Lay down a sheet of parchment paper and dust it with one or two tablespoons of flour, then “pour” the dough into the center of the paper. Just turn the bowl upside-down and use a rubber scraper to separate the dough from the bowl along one side – it will pull itself out the rest of the way. Dust the top of the dough with more flour to keep your fingers from sticking to it and start pulling and tucking under the edges to form a rough ball.

It doesn’t have to be perfect; none of us here are Martha Stewart. As you might have guessed from the subtle and cleverly written title of this recipe, you are not required to knead the dough at all. Once you have achieved something vaguely ball-like, cover it with a dish towel and allow it to rise for another hour.

Preheat your oven with the Dutch oven inside it to 450 degrees F. Once it’s fully preheated, remove the Dutch oven (carefully) and, using the parchment paper like a hammock, place the dough ball inside it, paper and all. Take a sharp knife and make three slits on the top of the dough – this either allows steam to escape or makes a fashion statement, I’m not sure which. 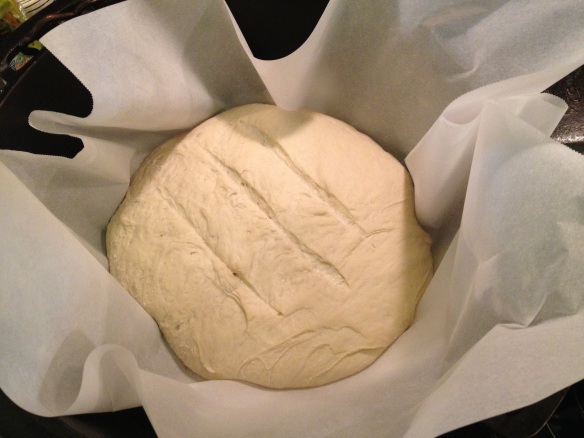 Put the lid back on the Dutch oven, put the whole thing back in the full size oven, and bake for 20 minutes. Remove the lid and bake for another 15 minutes, or until you have achieved a mouth-watering golden brown color. 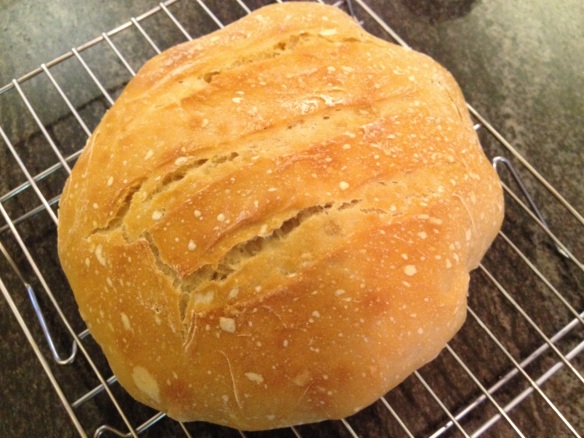 It’s ok to admit that this makes you hungry.

At this point, every other baking recipe I have ever seen says “allow to cool”. What a monumentally stupid suggestion that is. Why on Earth would I do that? That’s like saying “Allow your tires to go flat before driving your car.” I just don’t get it.

Because this is MY food blog, I’m going to tell you to cut a slice of piping hot bread as fast as you possibly can, slap a giant wad of butter on it, and send it down the hatch. Now cut another slice, add another wad of butter and this time a drizzle of honey as well, and send that one down the hatch after the first one. Dee-flippin-licious.

You are now officially allowed to proclaim that you a baker, and that you love bread. Enjoy.

Dissolve yeast in warm water. Slowly add 2 cups of flour, then the salt, then the final cup of flour. Continue mixing until dough begins to pull away from the sides of the bowl. Cover bowl with plastic wrap and allow to rise for 6 to 8 hours. Lay out a section of parchment paper and dust with flour. Scrape dough onto paper and form into a rough ball. Cover with a dishtowel and allow to rise another hour. Place empty Dutch oven and lid in conventional oven and preheat to 450 degrees F. Place dough ball and parchment paper in Dutch oven, cover, and bake for 20 minutes. Remove lid and bake an additional 15 minutes. Remove bread from oven, allow to cool slightly, slice and serve hot.