It’s no secret that I love The Gazebo‘s crazy breakfasts, so I was a little hesitant to go there for lunch. I wasn’t worried that it would let me down or anything like that – I just didn’t want to miss out on any epic breakfast win. Still, any visit to this place is bound to be a good visit, and I wasn’t disappointed.

The Gazebo is only open until 2pm, so the only late lunch you’ll have there is no lunch at all. My wife and I showed up at 1pm to try and avoid whatever crowd may have been present, and we were rewarded with an immediate seating. There were only one or two empty tables in the whole place though, so they weren’t exactly lacking for patrons.

” What’s that rice thing they’re eating over there? “

I’m a big Monte Cristo fan, which figures because it’s probably the least healthy “sandwich” imaginable. For the uninitiated, a Monte Cristo is simply a ham and cheese sandwich dipped in egg batter and pan fried. It’s typically served with powdered sugar and some sort of fruit preserves, so it has the whole sweet-and-savory thing going for it. I scanned the menu in the hopes I’d find one… Bingo! Monte Cristo, front and center. I’m having that. 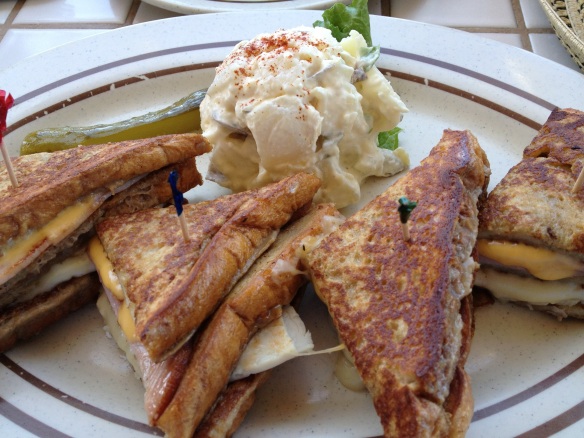 The Gazebo’s version of the Monte Cristo has two kinds of cheese and both ham and turkey.

My counterpart liked the sound of the BBQ Kahlua pork sandwich, but she had also spotted another dish that got her attention as we were walking in. “What’s that rice thing they’re eating over there?” she asked our waitress, pointing to another table. The waitress told us it was their breakfast fried rice, and that it was still available if we wanted some. It was just too tempting to pass up, so we went ahead and ordered a side of it. There’s nothing wrong with having some leftover Gazebo food in the fridge back at the condo. 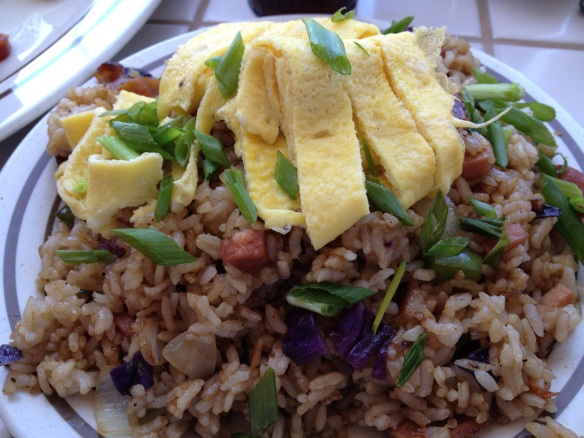 Everything but (probably and) the kitchen sink.

Our food arrived and we were just impressed as we have always been with The Gazebo. The Monte Cristo ranked as one of the best examples of the breed that I have ever encountered; it had the perfect amount of batter and wasn’t the slightest bit greasy. The Kahlua pork sandwich was relatively standard but also very delicious, and there wasn’t a trace of any disgusting fatty pork bits that so often plague such dishes. The real star of the show turned out to be the breakfast fried rice – we liked it so much we’re inspired to try making it at home one of these times. It was jam packed with bits of ham, sausage, egg, and who knows what else. We loved it.

The Gazebo’s excellent standing in my list of favorites remains unchanged. They are quite obviously just as adept at mid-day meals as they are at breakfast, and I can’t recommend enough that you pay them a visit. 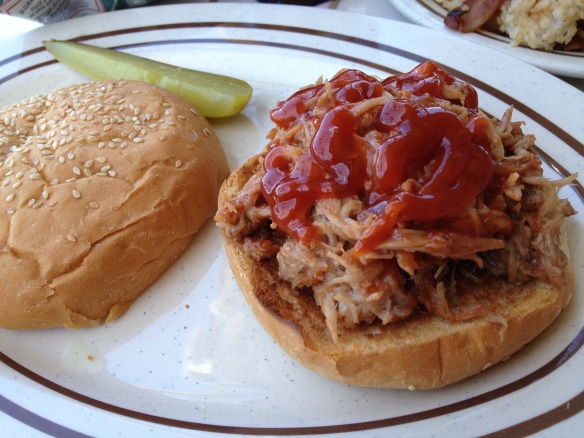 Kahlua Pork. If it ain’t broke, don’t fix it.