Xanh is a Vietnamese restaurant. The sign outside specifically mentions this, I assume to prevent would-be customers from confusing the place with a Piers Anthony novel. Really though, Xanh is more of an Asian fusion type of eatery centered around Vietnamese themes. Don’t let the extremely posh post-modern decor fool you; there are some tasty eats to be found here.

“We need to get going. We’re meeting people for dinner tonight, remember?” my wife said.

“Oh yeah, that’s right,” I lied. “I was just going to get dressed.” I changed into some socially acceptable clothes, grabbed the car keys, and drove us to downtown Mountain View.

I had no idea there was a night club on board the Starship Enterprise.

” We felt somewhat on display as we thumb wrestled crustaceans “

As we walked into the back entrance of Xahn, I was immediately struck by the über-chic decor and the muted beatnik electronica rhythms pulsing through the restaurant’s invisible sound system. The overall ambience is about halfway between a black-turtlenecks-only spoken word coffee bar and a full blown rave. Excitingly hidden colored lights abound throughout the establishment, pointing at all sorts of interesting angles and highlighting pretty much everything.

They’re trying too hard to be hip,” said my better half.

“Well, yeah, but they’re kind of doing it,” I replied. As I looked around the crazy decor I noticed a quiet section of wall where half a dozen Michelin Guide dining awards hung. That was a surprise, and also a good sign. 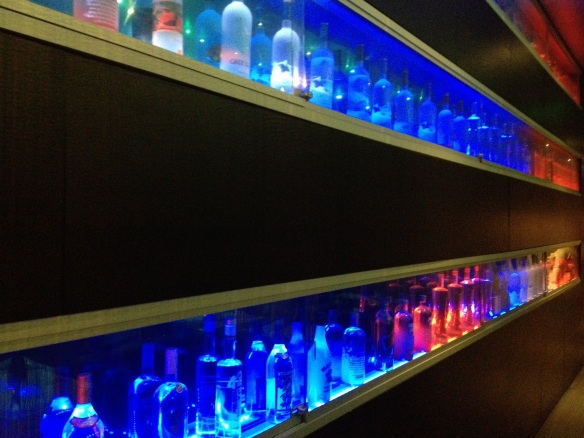 This particular wall is decorated like an alcoholic police car.

The people we were supposed to meet hadn’t arrived yet, so we decided to have a drink while we waited. Although the wide selection of on-tap beers made me very happy, I immediately felt way too old to be sitting at the clinically modern bar. In fact, nearly everybody I know would be either too old to be at this bar or simply not old enough to drink. Take your current age in years and subtract 21; that’s how many years ago you should have hung out here, but certainly not now. If you asked me to describe the bar’s decor with a single, hyphenated phrase (Let’s just pretend like you did), I would call it “techno-sterile.”

We decided that a table would be a better place for us to hang out, so we sat down and began reviewing the extensive menus. “XANH” was stylistically written in large, modern font across the cover of each menu. I couldn’t help but notice that, when viewed upside-down (i.e., from the other side of the table) it spelled “HNVX”, which just so happens to be the sound a Rottweiler makes when choking on a kazoo. It’s an odd thing to print on a menu cover. 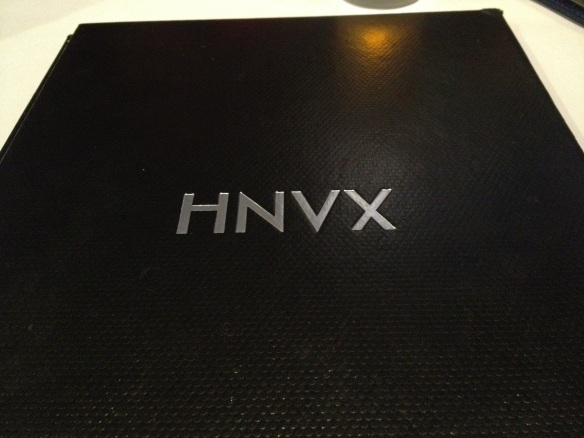 We ordered some crispy pot stickers and Kobe rolls as appetizers, and in just a couple of minutes they arrived at our table; HNVX certainly receives high marks for prompt service. As advertised, the pot stickers were crispy and delectable, the chicken-and-shrimp filling was excellent, and the soy vinaigrette was a wonderful addition. The real star for me were the Kobe rolls, which were very much like traditional spring rolls with the added bonus of delicious steak. The crispy shallots sprinkled across the plate were like miniature oniony potato chips, only better. The provided clear sauce was so mild, however, that it almost had no flavor at all. It wasn’t bad per se, it was just mostly a why-bother type of affair.

Each pot sticker was inexplicably perched atop a weird and stumpy spoon-ladel. Alrighty then.

As we finished the appetizers, I noted that our dinner double date was now officially 30 minutes tardy. Suddenly, my spouse declared, “Oh, I just realized that we’re supposed to be meeting them next weekend, not today. Sorry! Should we order dinner?”

Oh for the sake of… You know what though? This wasn’t necessarily a bad thing. We got to eat at a new restaurant and try a couple things on the menu we normally wouldn’t have. We confided the scheduling error to the understanding and patient waitstaff, booked another table for the following weekend, and ordered some shrimp with garlic noodles (one of HNVX’s most popular entrees) to share.

The garlic noodles were quite good, but honestly they were not the very best I’ve ever had. I would certainly order them again, and in fact I’d recommend that you do so as well, but for me they weren’t a drop-everything type of dish. The shrimp were also very tasty but again, not alone worth seeking out this restaurant for. One of my problems with this entree in particular was how difficult it was to eat. The shrimp themselves were large enough to require license plates, but the only utensils we were provided were a fork, a spoon, and a pair of slippery metal chopsticks. Our options were to A) pick up a shrimp with chopsticks and chew on the end of it, B) stab a shrimp with a fork and chew on the end of it, C) attempt to saw a shrimp in half using a spoon, or D) eat the entire dish with our hands, primate style. None of these options worked out very well (we had a minor noodle explosion at one point) and we felt somewhat on display as we thumb wrestled crustaceans amidst the stylish and surgically clean decor.

In the end I found that I had enjoyed HNVX (ok, Xanh) quite a bit in spite of its idiosyncrasies and “sleepy rave” decor. I rate it 32 out of 40 backlit vodka bottles, making it worth the trek to Mountain View if you’re reasonably near the area. The food was very good, the service was quick, and the bill was reasonable. I’m looking forward to exploring the menu further when we head back here next weekend, but I need to shop for black turtlenecks and glow sticks first.

UPDATE
This restaurant is so nice I reviewed it twice: Random Revisit: Xanh

These little gems were Kobe-licious.