In ancient times, falafels were not just delicious fried balls of chick peas. Falafel making was at the center of human existence in those days; empires rose and fell at the mercy of their leaders’ falafel prowess. To question another’s falafel was to insult the very core of their being, and bloody falafel duels were common on the dusty streets of, uh … the cities where, um, falafels were popular. Whichever cities those were. I’m not really sure.

Ok, so perhaps I’ve embellished a little bit on the history of falafels, but that’s beside the point. What really matters is that I have personally researched two present-day South Bay chick pea giants: Falafel’s Drive-In and Falafel Stop. Let’s see how they compare.

Smallest ‘parking lot’ I have ever seen. I’m not sure it can hold an entire car. 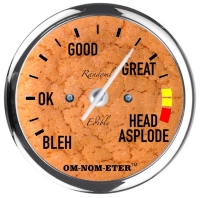 The first stop on my quest for the greatest Mediterranean food within five miles of my house was Falafel’s Drive-In. This place was already immensely popular before being featured on Diners, Drive-Ins and Dives back in 2007, and since then it’s become even more mainstream. The first thing my lunch party and I noticed when we pulled up was a cartooned Guy Fieri featured in the middle of a large, colorful mural in the semi-outdoor dining area. Then we spotted another Guy Fieri in another mural, and then another. So pretty much this place is the Church of Guy. Weird. If anyone had asked me if I’d like some Kool-Aid, I wouldn’t have been surprised.

The decor isn’t boring, that’s for sure.

The menu offers a variety of Middle Eastern and Mediterranean dishes, as well as more traditional diner fare like burgers and fries. After deliberating on the menu and placing our order, it took only a few minutes for our food to show up at the window – barely enough time to finish counting Guys. 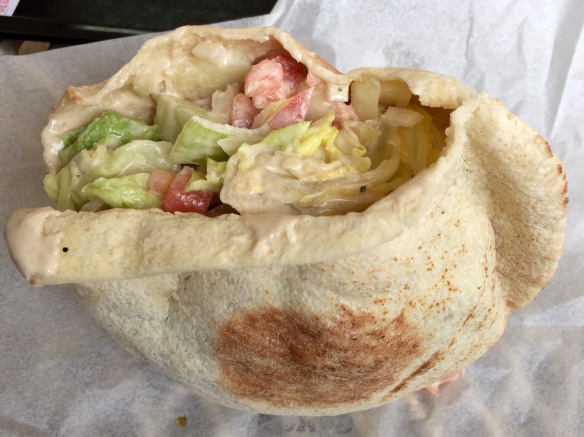 I opted for a gyros pita, mostly because that’s what I always get at places like this. Instead of the thin strips I was expecting, Falafel’s Drive-In serves their gyros meat as large, cubed lumps… and it really works. The tzatziki sauce was excellent, the veggies were crisp and fresh as can be, and the pita bread was stuffed to its absolute maximum capacity. I’ve had plenty of gyros over the years, and this is one of the better ones I’ve encountered. I’ll be back for another one of those.

I’m pretty sure I have no idea how to pronounce this.

Also included in our lunch order was a koubby, which is basically a large beef meatball with pine nuts and onions wearing a crispy wheat jacket. None of us at the table knew how to pronounce “koubby” but we guessed it might rhyme with “Scooby”, and so we simply referred to it as a Scooby Snack. This is undoubtedly incorrect on many levels, but because it amused us we just went with it.

I don’t have a lot of experience with Scooby Snacks – indeed, it was something new for all of us – but I am happy to report that it was very tasty indeed. I noticed a definite undertone of cinnamon in the ground beef filling, but it was well-balanced and very meaty. It reminded me very much of pastitsio (aka Greek lasagne) in its flavor profile. Delicious.

Everyone likes pictures of French fries.

Falafel’s Drive-In is also very well known for their banana milkshakes, but because it was a million degrees below zero that day we opted out. Ok, so it was actually about 55 degrees F, but in California that’s cold enough to make liquid nitrogen. Weather aside, I give Falafel’s Drive-In a very respectable 8 out of 10 Scooby Snacks. We very much enjoyed our visit and would be happy to return sometime very soon. 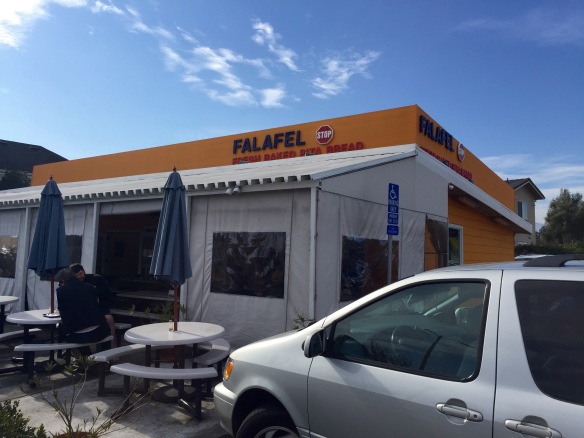 The second half of this Mediterranean showdown takes place at Falafel Stop, another icon of South Bay one-off fast food. At first glance, it looks pretty much the same as Falafel’s Drive-In. It has a walk-up window, generous outdoor seating, (almost) no parking, and a massive cult following. At this point, however, the similarities end. You will not find a burger, gyros, or koubby on the menu at Falafel Stop; instead the focus is on shuwarmas, kebabs, and of course falafel.

There’s plenty of room to sit and be confused about your order.

We perused the menu, decided on our plan of attack, and obediently stood in line underneath a sign clearly indicating “Order Here”. (There’s a reason I make a point of this fact. More on this later.) While we were waiting, we were presented with piping hot samples of crispy, divine falafel complete with a drizzle of dipping sauce. Oh my goodness were they delicious, and quite an unexpected bonus as part of our visit. Plus one point for Falafel Stop.

We ordered a shuwarma pita, a Greek salad, some falafel, and a couple of sodas. We paid the cashier and he handed us two receipts. He said, “Head over to the grill for the hot food, but the falafel are from the kitchen so we’ll bring those to you. Let us know when you get the salad so we can put another falafel on that.” Even he seemed confused by this. We nodded dumbly, took the receipts, and looked around unsure of what to do next. “The grill will have your order, that’s what the other receipt is for,” he clarified.

We shuffled a few steps into the dining area, scanning our two receipts for a possible clue and glancing back at the dubious “Order Here” sign. At that moment, someone handed us our sodas and a little bag of falafel. The cashier stuck his head out of the door and said, “The kitchen already knew about your falafel so you can never mind that part.”

Utterly flabbergasted, we decided just to sit down and see what would happen next. After a few minutes, someone walked out from what was apparently “the grill” and asked us if we had ordered a shuwarma pita. “Um, yes, we did,” I replied.

“Oh ok,” he said, “we have your order over here. I need your receipt.” I handed him one of the receipts. “The other one,” he said. I handed him the other one. He walked me over to the grill area and proceeded to expertly and swiftly construct my shuwarma pita, and it looked fairly amazing. 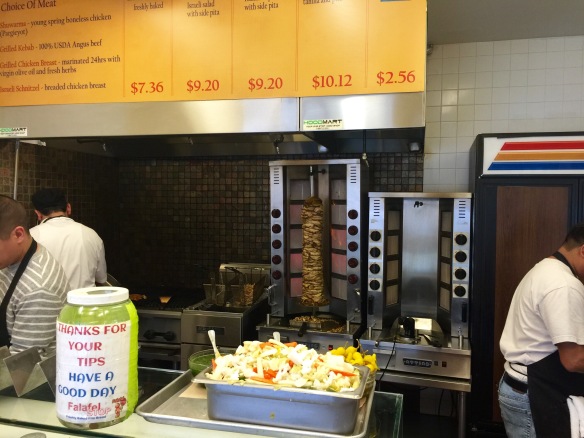 The prices at Falafel Stop appear to have been set using a random number generator.

I returned to the table with my grilled pocket of perfection, and we waited. Nothing seemed to be happening. We noticed an area next to the cashier that looked like it might be where the salads happen, and we guessed our other receipt might be required. It was. The salad people did their thing and before long our entire order had been completed. We think.

This is the pita bread you’ve been searching your whole life for.

Setting aside the ridiculous ordering process for a moment, let me just say that the food at Falafel Stop is nothing short of spectacular. The falafel were great (as I’ve already mentioned), the shuwarma meat was seasoned to perfection and plentiful, and the veggies were remarkably fresh. Even the salad was excellent. What really caught me by surprise, however, was the pita bread. Holy smoley, what a masterpiece. Pita bread is usually a forgettable, dry envelope that holds delicious things; it’s just a utensil, a throw-away. I don’t think I can even recall what normal pita bread even tastes like… but THIS stuff. Wow! It arrives fresh from the kitchen piping hot and fluffy – it’s truly a thing to behold. It falls somewhere between an English muffin and naan. Incredible.

It’s all Greek to me. Salad, that is.

In the end, I felt that the food at Falafel Stop edged out Falafel’s Drive-In. The two can’t really judged in a side-by-side comparison because they are so different, but if you asked me which of the two I’d rather visit next, I’d choose Falafel Stop. Unfortunately, the inane process to actually acquire food at Falafel Stop put a bit of a damper on their score, but I still feel that they deserve a solid 9 out of 10 fluffy pitas.