The el Taco de Oro truck is exactly what you’d expect it to be, plus a little something extra. Sure, it’s “just” a taco truck, but the quality of the preparation and flavor of the food are worth noting. If you’re in the mood for some tasty south-of-the-border eats and don’t mind standing on the side of a busy road in the process, look no further.

I love food trucks. There’s no better way to get out of a restaurant rut than to seek out some mobile cuisine; it’s a great way to try something new without having to go very far out of your way. Unfortunately, you can’t just stroll down to the corner and expect the exact truck you want to be waiting for you there, but there’s usually something awesome lurking nearby. In addition to Facebook and Twitter, there are a number of sites that facilitate the process of locating meals on wheels, such as Roaming Hunger and Moveable Feast. It’s like a treasure hunt for your stomach.

” The quesadilla bar has officially been raised “

On this particular day, I just so happened to stumble across the El Taco de Oro truck while out and about running errands. It was parked along El Camino Real in Sunnyvale, and the scent of scratch-made tacos wafting through my sunroof was more than I could bear. I pulled into an adjacent parking lot and tried not to drool as I walked over to where the truck was parked.

Exciting and bizarre multi-culture fusion cuisine is great and all, but sometimes I just want some really good Mexican food. A quick browse of the short-but-sweet El Taco de Oro menu told me I was in the right place. The first thing on the menu that caught my eye, not because it sounded delicious but because it confused me, was “beef cheak”. This is either a mildly amusing typo or a cleverly marketed combination of steak and beef cheek.

The menu seems to be a bit tongue in cheak.

I wasn’t feeling quite brave enough to give cheak a try regardless of what it turned out to be, so instead I went for a quesadilla with pollo asado. Dee. Flippin. Licious. I normally think of quesadillas as benign and slightly boring, but the magician working the grill managed to coax a huge amount of flavor into the pollo asado. The richly marinated chunks of chicken were tender and perfectly cooked, the cheese was well portioned and melted just-so, and the toppings were all fresh and wonderful. Big thumbs up. The quesadilla bar has officially been raised. 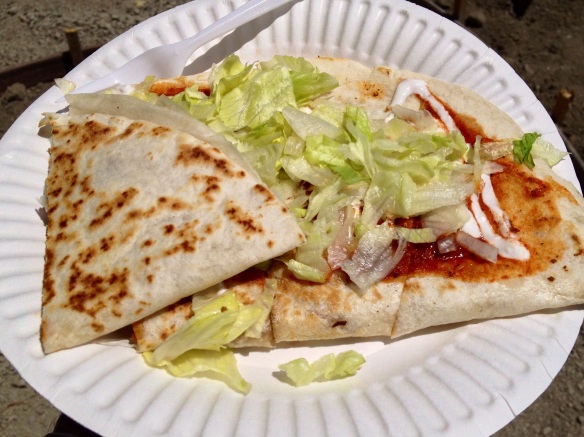 I really and truly had a dream about this quesadilla later that night.

Clearly, more exploration of the menu at this truck is required. For now, though, I have plenty to go by for a review. The quality of the food and outstanding flavor are enough to earn El Taco de Oro a very satisfactory rating of 9 out of 10 pounds of beef cheak. This mobile Mexican masterpiece is well worth taking notice of, and if you find yourself on El Camino in Sunnyvale, definitely do give it a try. Forget the Internet, just roll your car window down and follow your nose. 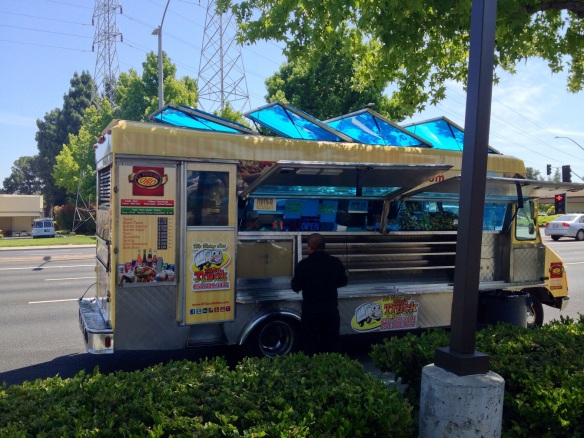 What a happy little truck.

My experience at Danville Station Firehouse Bar & Grill (henceforth abbreviated as DSFB&G) was ultimately not a very good one. It started out pleasantly and with much promise, but over the course of the meal it became clear that this place unfortunately sucks. It’s too bad too, because the location is prime and the wait people (wait persons?) are great, but I just couldn’t get past the terrible food.

On a typically lovely Saturday morning in July, my wife Shawn and I took our dogs to well-to-do Danville for a day of strolling about and shopping for random things. After a couple hours’ worth of browsing through old chandeliers and decorative concrete whatnots, we decided it was time for an early lunch. There are a lot of really great places to eat in Danville, so it was with much excitement that we took inventory of our food options along Danville’s main drag. We read through some good looking menus and peeked in a bunch of windows, but ultimately we decided on DSFB&G.

Downtown Danville is as cute as a button.

DSFB&G has a lovely shaded patio with cozy tables – mostly all filled with happy looking people – and so we figured it had to be pretty good. We were welcomed inside the patio, dogs and all, and were seated immediately. Our waitress quickly brought over a couple menus and a bowl of water for our dogs. Major bonus points there. The menu, as it turns out, was a bit on the short side and included only breakfast items. Strange for 11:30am, but that’s fine. We’ll go with breakfast. We asked our waitress about a couple items on the menu and as it turns out she hadn’t tried either of them, but she did make sure to mention the name of another restaurant where said menu items were really good. Curious. I shrugged it off as nothing and ordered the chicken and waffle with an iced tea, while Shawn opted for a banana buttermilk pancake short stack, side of chicken apple sausage, and a Diet Coke.

This is just like any other chicken and waffle dish you’ve ever had, except that it isn’t good.

Our food arrived shortly afterwards and it was very… ordinary. It didn’t look unappetizing per se, just ho hum. Upon closer inspection it turned out that the underside of my chicken was very dark, almost burned, and the waffle was dry and sad. At least the eggs were prepared correctly. Shawn’s banana buttermilk pancakes were literally only that – two ordinary buttermilk pancakes with sliced bananas on top. The pancakes, waffle, and chicken were all sub-average and tasted identical to one another. To add insult to injury, we then realized there was no butter anywhere to be found. What the heck, no butter?? If I was governor, I’d make that a class 2 misdemeanor. 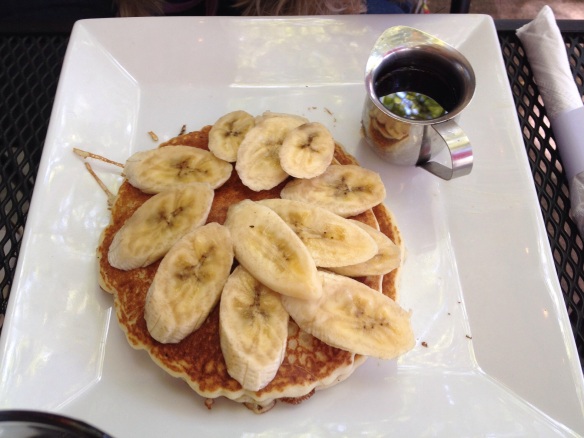 Bananas on top of pancakes do not banana pancakes make.

Just as I was trying to figure out how to choke down my waffle without butter, Shawn said, “This is the worst chicken apple sausage I have ever had.” Being morbidly curious, I tried a piece. Holy flavorless meatsticks, Batman! She wasn’t kidding. Those sausages were the most offensively bland food I have accidentally touched with my tongue in the last 10 years, and I promise you that I’m not exaggerating. They seemed to be nothing more than week-old boiled rooster meat sprayed with apple-scented air freshener. Oh, and they were cold in the middle too. Quadruple yuck.

And what is one supposed to do with disgusting food when they don’t want to make a scene? That’s where the dogs come in. Our fluffy little mutts were thrilled to help and eagerly ate pieces of sausage, which they seemed to enjoy just fine. They also like bully sticks, though, so I guess there’s no accounting for taste.

If there is a Hell, this is what they serve for breakfast.

When we had finished, our waitress brought our bill, commenting how she hadn’t tried the chicken and waffle but there’s this really good waffle joint down the street that is supposed to be killer. Now she tells us. We paid, tipping decently, and left DSFB&G forever with no intention of ever returning. As we walked away, Shawn produced another quotable: “The best part of that meal was the Diet Coke.” Ain’t that the truth.

And just when we thought our disappointing meal experience was wrapped up for the day, one of our dogs barfed up the chicken apple sausage on the drive home. Sigh. It’s a fitting end I suppose. DSFB&G has good ambience and friendly employees, but whoever is running the kitchen has pretty much ruined everything. I’m sad to say that I rate this place a dismal 1 out of 12 bottles of floor mat shampoo, Randomly Edible’s lowest score ever. If you’re considering visiting this restaurant, don’t.

Standard Restaurant Review Disclaimer
The ambiguous and illogical rating system used in this review is not intended to be pinpoint accurate. It’s only there to give you a general idea of how much I like or dislike an establishment, and it also gives me an excuse to write silly things. If my rating system angers and distracts you, there’s a good chance you have control issues. I would also like to point out that I am not a highly qualified restaurant reviewer person, nor do I particularly care what that job is called. If you were under the impression that perhaps I was one of those people, consider your hopes dashed. Lastly, wow! You read the entire disclaimer. You get a gold star on your chart toy.