E&O Asian Kitchen is a great place to eat. The varied and fanciful menu is packed to the gills with delicious Asian-influenced flavors and preparations, but somehow everything still seems down-to-earth. Some “fusion” type restaurants seem to trip over their own feet by trying too hard to be weird, but E&O has a much better idea of how far to go without over-cheffing things. The food is interesting but not shocking, and even the pickiest eaters are likely to find something here they’ll enjoy.

” It sounded too much like a place to buy T-shirts “

It was Friday night, and I was fighting tooth and nail with an intersection full of other exasperated drivers for the very last parking spot in San Francisco. Miraculously, I emerged victorious – neener neener! I had arrived at E&O only just in time for the 6:30pm reservations that had been made, dinner party in tow. Whew. A few minutes later we were seated at our table in the back of the restaurant’s stylishly appointed dining area, browsing the drink menus. E&O has a decent selection of hand crafted specialty beverages, as well as a small but admirable selection of beers.

We placed our drink orders and got down to the serious business of narrowing down our food choices, most of which feature an Asian flair of some sort. I remember this restaurant back when it was called E&O Trading Company, but apparently the ownership decided it sounded too much like a place to buy T-shirts or trade stock online. In a cunning stroke of subtlety, they changed the name to “E&O Asian Kitchen”, an obvious attempt to club people over the head with the fact that they serve Asian cuisine. Still, as a business I can’t really fault them for this approach. Sometimes you need to shout in the faces of your potential customers in order to get their attention – that’s life in the cutthroat restaurant industry. 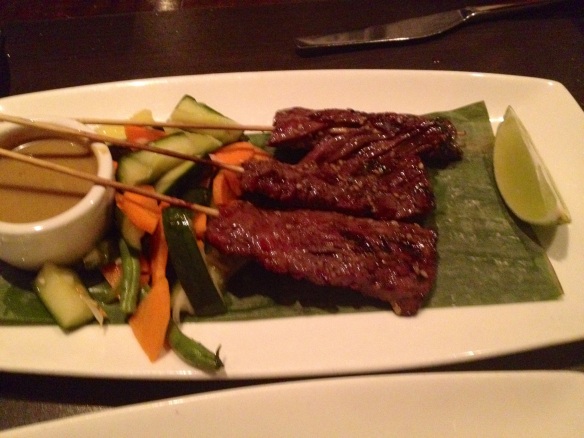 Meat on sticks. Satay is caveman food done all fancy-like.

Ham-fisted name changes aside, E&O’s menu is varied, intriguing, and fun to explore. There were so many different things we wanted to try that we opted for a collection of small plates and appetizers instead of ordering entrees. We kicked it off with one of E&O’s signature dishes: Indonesian corn fritters. We added steak satay, butternut squash dumplings, drunken noodles, and black pepper shaking beef. Our food arrived remarkably quickly and looked wonderful. Kudos to the kitchen staff for being on top of things in the middle of a busy Friday night. 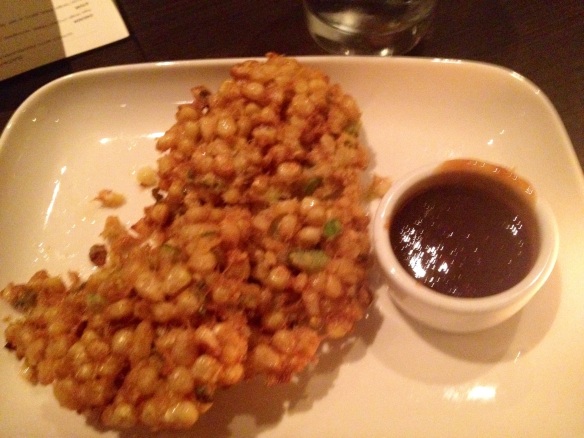 Probably the worst picture of anything I’ve ever posted. Deal with it. These are corn fritters.

The steak satay was so good that we immediately ordered another plate, and we nearly doubled up on the corn fritters as well. Ahh, the corn fritters. They were delicate, crispy, decadently fried, and yet as light and sweet as fresh corn. I could make an entire meal of just those, no problem. If you feel like maybe you’ve heard of E&O’s corn fritters before, you probably have. They are awesome enough to have been featured on the Food Network, so if you haven’t tried them before you owe it to yourself to seek them out. 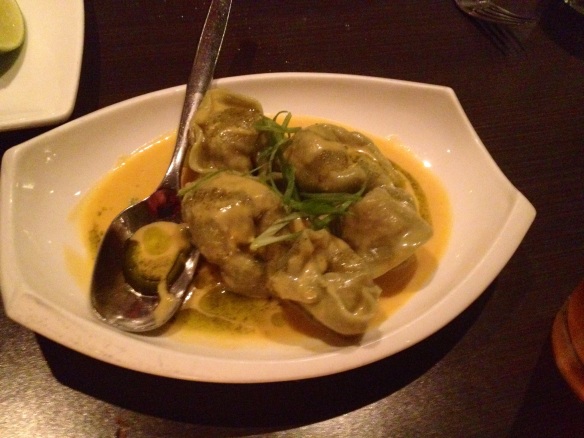 The butternut squash dumplings were the biggest surprise for me personally, mostly due to the fact that I didn’t expect to like them. I find the flavor and texture of squash to be off-putting at times, but neither of these traits made an appearance in the dumplings. They were creamy and wonderful, and the red curry lemongrass sauce was jam packed with the delicious flavor of every single Thai dish you’ve ever had. The drunken noodles were the only real let-down, and that’s because they were simply good and not great like everything else on the table. I’ve also been spoiled by the drunken noodles at my favorite Thai place, so E&O’s version just didn’t quite make the grade for me.

For dessert we opted for an order of “bananamisu”, devil’s food cake with salted caramel, and spicy ginger cookies. As with the savory dishes, all of the desserts were excellent. The bananamisu, as astute readers might guess, is a banana-based twist on tiramisu. It’s a combination that really works. 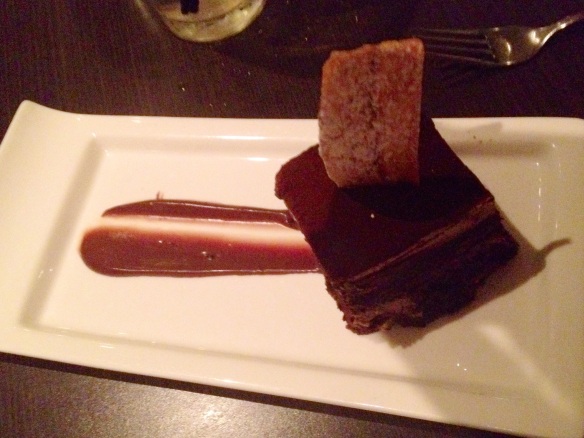 Knock knock. Bananamisu. Bananamisu who? Not sure where else to go with this one.

The well-executed (although predictable) devil’s food cake was delicious, but it was the ginger cookies that got my attention. They were just-so chewy, warm, and intensely gingery. Two of us at the table thought the cookies were tastiest, while the devil’s food cake and bananamisu got one vote each for best dessert. Because I don’t care about opinions that differ from my own, we can conclude that the ginger cookies were indeed the best. One thing that did catch my eye about the bananamisu and devil’s food cake was how similar they looked to one another. They were both dark brown, rectangular bricks of the same size served on the same dish at the same offset. Considering how creatively everything else was plated, this stood out as a bit of a shortcut. There, how’s that for being picky?

COOOOKIIEEEEE (These are the ginger cookies I mentioned earlier, by the way.)

In the end, I wasn’t able to find much at all to complain about with regards to my experience at E&O. The only thing that really stood out was that the shaking beef would have been better if it was served with rice. Of course rice is available as a side, but it wasn’t until after the meal that we realized we had missed out on soaking up all that wonderful sauce. It wasn’t a deal breaker by a long shot, just a curious omission. Based on the excellent experience all of us had throughout the meal, I rate E&O Asian Kitchen a solid 9.2 out of 10 corn fritters. It’s certainly worth looking this place up, assuming you can somehow find a parking spot.

If I squint my eyes I can almost see the salted caramel. No, it’s gone now.

This easy-to-make, satisfying recipe is one of my favorite party foods. It’s delicious, doesn’t mess up your whole kitchen, and requires no real planning ahead. It comes together as quickly as a box of brownies, and it’s far less likely to be duplicated by other party patrons. It’s also hearty enough to act as a makeshift dinner, should you find yourself starving to death amidst a forest of pretzels, chocolate-dipped strawberries, and inexpensive cheese cubes.

I was first introduced to this recipe some years ago by my wife. At the time I had assumed that, like her, Ro*Tel sausage dip heralded from Texas. Upon further research, however, I discovered that nobody really knows where the hell it comes from. I know where it’s going though, and that’s in my belly.

This picture makes my blog look like a Penny Saver ad.

Your first task is to collect the items you see before you. I strongly recommend against substituting anything, as the strength of this recipe lies in the synergy of its simple ingredients. To goof around with any of the three main components is to invite disappointment. If you have a hard time locating the Ro*Tel, look wherever your grocery store stocks canned tomatoes.

Preheat your oven to 350 degrees F. Before you do anything else, take the cream cheese out of the fridge and set it on the counter to soften – this will make it easier to work with later. On medium-high heat, brown the sausage in a large frying pan. Or, if you have a cast iron skillet, use that instead. Not only does it do a better job of crisping up the sausage, but it can go straight into the oven as well. 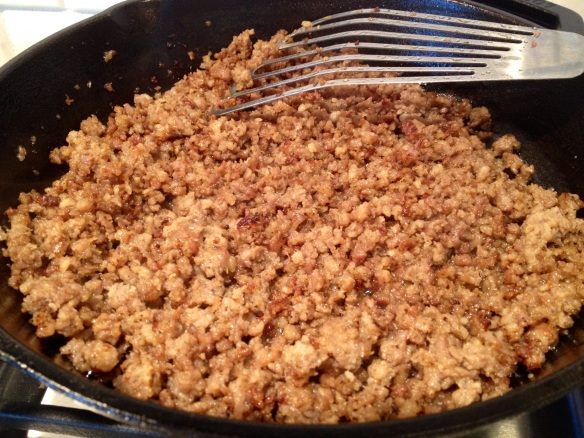 Break up the larger chunks of sausage as it cooks, making sure it’s done all the way through. If the grease freaks you out, drain it off.

Reduce heat to medium and add the cream cheese and can of Ro*Tel. There’s no need to drain the Ro*Tel, just dump it in there juice and all.

Everyone in the pool!

Stir carefully until the cream cheese has completely melted and the mixture is evenly blended, then turn off the heat and transfer the whole mess to a casserole dish of some kind. A Pyrex baking dish is a good choice; any size will do as long as it can hold all of the sausage mixture without overflowing.

Bake uncovered for 10 or 15 minutes, until your newly created sausage dip is bubbly and awesome. Break out the Scoops and dig in, but remember not to burn away all the flesh from the roof of your mouth. If you’re going to take this to a shindig at someone else’s house, cover it securely with aluminum foil, wrap it in an old (but clean!) bath towel, and lay it flat in the trunk of your car. It will stay hot for a couple hours this way – no reheating necessary.

Warning: It’s 3,697 degrees hotter than you think it is. Consume slowly.

Preheat oven to 350 degrees F. Brown sausage, add undrained can of Ro*Tel and cream cheese. Stir until cream ceese is evenly mixed in. Transfer to baking dish, bake for 15 minutes or until bubbly. Serve hot with Scoops.

Standard Recipe Disclaimer
I don’t come up with a lot of my own recipes (unless you count my own personal milk-to-Grape-Nuts ratio), and chances are the recipe posted above belongs to or was inspired by a person other than me. So if you’re wondering whether or not I ripped somebody off, I probably did. Don’t get out the pitchforks and torches just yet though! I want to make absolutely sure I give credit where it’s due, so if you think someone deserves recognition for something that I haven’t already called out FOR CRYING OUT LOUD LET ME KNOW. Thanks, I appreciate it. Here’s a cookie.