The most awesome thing in my kitchen right now, except perhaps for a leftover jar of Nutella, is my set of cast iron cookware. I absolutely love it. Cast iron cooks like a dream, it (can be) super easy to clean, and it will literally last a lifetime. I have no particular opposition to modern non-stick surfaces, but there’s something very simple and honest about cast iron – minimizing one’s daily intake of Teflon is a nice side benefit.

” You can whack people on the head with it “

Another key advantage of cast iron is its ability to make food wonderfully browned and crispy. I’m sure there’s a scientific explanation for why this is, but I’m quite happy considering it to be magic. Cast iron also does a remarkably good job of distributing heat across its surface, allowing a bit more margin of error for burner-temperature-challenged individuals. 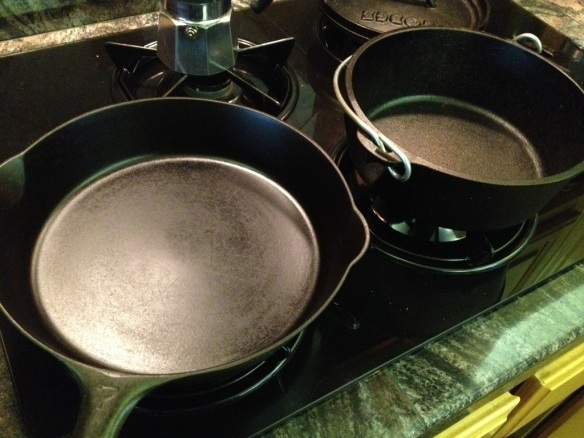 Every kitchen needs a set of these babies.

Now that I’ve convinced you to take the plunge (I have, haven’t I?), it’s time to start shopping for your first piece of cast iron cookware. I highly recommend starting out with a Lodge 8″ or 10″ skillet, not because they’re the best you can buy, but because they’re fairly well made, cheap, and good for making mistakes in as you learn. Also, if you happen to find yourself in a 1920’s cops-and-robbers film, you can whack people on the head with it. Brand new pre-seasoned Lodge skillets are around $15 and can be found just about anywhere. At this early stage of your cast iron career, I would not recommend buying anything antique or used or weird. Just stick with the basics. You will also need a metal spatula. Metal. Not plastic or wood or silicon or narwhal tusk. METAL. Trust me on this one. If you don’t already have a metal spatula, buy this one.

Ok, now we’re ready to talk about seasoning. In this context, “seasoning” does not mean salt or pepper or anything vaguely related – it’s the glossy nonstick finish that develops on a piece of cast iron cookware the more it is used. Some people might think that this kind of seasoning is supposed to add flavor, but that is not the case. It more literally refers to being seasoned, as in experienced, and that simply means the cookware behaves more reasonably when you’re cooking with it. There is an absolutely superb cast iron seasoning guide on richsoil.com; I highly recommend you give it a read-through if you’re curious about the finer details of the process. Here’s the 30 second version: Wipe down your cast iron with a very thin layer of oil and stick it in the oven at 400 degrees for an hour. It’ll smoke a bit so make sure you have your vent fan on. In addition to that (or instead of), simply use your cast iron for every day cooking and it’ll season itself. Just remember that you always need to cook with a small amount of actual oil or fat and not a freaky imitation of dubious origin.

You now have everything you need to start cooking with cast iron. For the time being, go with easy stuff like sausages or grilled cheese sandwiches. Stay away from anything acidic (e.g., tomato sauce) or liquid-y (e.g., pancakes, eggs). When it comes time for cleanup, simply scrape the pan with your spatula and wipe thoroughly with a paper towel. It should be spotlessly clean at this point and ready to be put away, but if not go ahead and hit it with a tiny bit of soap and water.