If you’re looking for a mean pint of brew and a tasty meal, McMenamins Six Arms is the pub for you. It’s not the most super fabulous place in the whole world, but then again it’s not trying to be. Six Arms serves a mind-boggling (and gut-rumbling) array of comfort food gems, all of which pair up nicely with McMenamins lovingly crafted beers. Mmmmmmm, beer.

” The perfect reward for hiking up a hill in the rain “

Downtown Seattle is a nice place. It’s clean, cosmopolitan, down to Earth, and ever so slightly odd… but in a good way. On Labor Day weekend, however, the whole place transforms into a surreal, nonsensical alien landscape filled with mysterious clouds of body odor and people wearing elaborate costumes. This is mostly due to PAX Prime taking over the entire convention center and many of the surrounding buildings, but Bumbershoot also plays a part in the weird-ification process. The best way to describe it? Imagine being in a high school locker room on Halloween during a zombie apocalypse. It’s like that.

I found myself – along with a few friends – right in the middle of this chaos during lunch time. Every single sandwich shop and fast food joint in sight was packed to overflowing, and we knew we had to get away from the crowd somehow. Somebody suggested McMenamins Six Arms, a local pub that was just a short walk up the hill and nicely separated from the mayhem surrounding the convention center. We all agreed that this sounded dandy, so we forced our weary feet to start walking. After 10 or 15 minutes of minor uphill huffing and puffing, we arrived.

Unfortunately, the beer doesn’t actually come out of those pipes.

We were seated immediately on our arrival to Six Arms and given an extensive beer menu to lust over. I couldn’t resist the allure of the Hill Top IPA, and I also ordered a Reuben sandwich as a garnish. The rest of the table ordered an assortment of burgers, soups, and of course beer. The Hill Top IPA arrived in front of me in a couple minutes, and it turned out to be hoppy and refreshing without being too overpowering. It was pretty much the perfect reward for hiking up a hill in the rain.

One is never too old to appreciate tater tots.

The food was good, although perhaps not quite as good as the beer. That might just be my own perception but hey, I’m the one writing the blog here. My Reuben was flavorful and piled high, but the pastrami was dangerously ordinary. My tater tots were fried to extra-crispy perfection; I enjoyed them thoroughly in spite of the fact that they were ever so slightly oily. None of this of course slowed me down from clearing my entire plate.. er, basket I should say.. and I was pleasantly satisfied after my meal. The assortment of burgers around the table were reported to be delicious, and all of them yielded prolific amounts of juice as they were consumed. I’m not convinced over-juiciness is a good thing, but since I didn’t hear any complaints I’ll let it slide.

That is one shiny bun.

Ultimately, McMenamins is exactly the kind of quirky place I look for when I’m on the road. Local beer and comfort food both rank very highly on my list of critical restaurant criteria, and this place does both very well. I won’t say it was the very best meal I’ve ever had in my entire life, but McMenamins earns an above average 60 out of 67 kegs of beer – a perfectly respectable score. I will definitely be looking this place up again the next time I find myself surrounded by unwashed Millennials wearing Pokémon costumes.

My wife Shawn and I have a lot in common, especially our tastes in cuisine. We particularly enjoy comfort food type dishes, and we have quite a collection of recipes in this category. We tend to cook these dishes while we are camping (we have a 5th wheel RV trailer the size of Iceland and an equally massive redneck truck to tow it with), so we have dubbed this sort of food “trailer trash”. We love the heck out of it.

” If you’re a wimp, top with the recommended two cups of cheese “

This recipe is fits squarely into the above category, and we couldn’t be happier about that. It’s apparently a classic, but it’s a new one on us. The version we initially came across was this one, but you can find unsurprisingly similar recipes here, here, and here. It includes all the cornerstones of blue collar cooking, namely meat, cheese, potatoes, and cream of chicken soup. There is no way this can suck.

Preheat your oven to 375 degrees F. If you don’t know what “F” means, I’m not going to explain it. That’s your fault for not paying attention in school. In a skillet, sauté the onion in a little butter and olive oil. Add the ground beef and cook until browned. If you prefer a bit more onion-y-ness in your food, brown the beef first and add the onion after. Or, if you are feeling particularly lazy, you can use dehydrated onion instead.

Stir the cream of chicken soup into the ground beef mixture, salt and pepper to taste, and spread evenly in the bottom of a 9×13 baking dish. Top with the frozen Tater Tots in whatever form of symmetry makes you feel good about yourself. In a related side note, do not attempt to eat a frozen Tot – they are crazy disgusting when not cooked. I’ve heard. Bake for about 30 minutes or until the Tater Tots are golden brown. Don’t worry about the cheese, we haven’t forgotten it. That comes next. 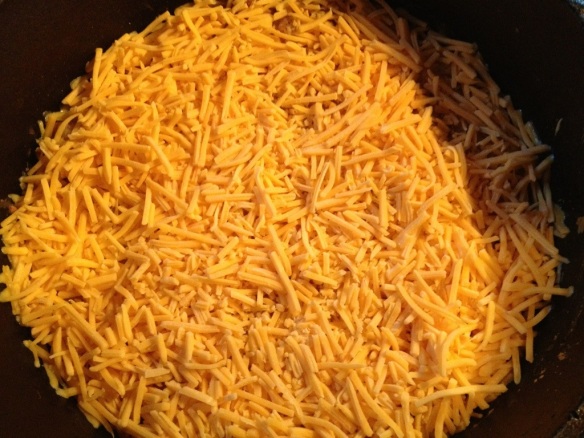 Remove casserole from oven and, if you’re a wimp, top with the recommended two cups of cheese. If, on the other hand, you feel more fiercely independent and confident in your kitchen abilities, add three cups of cheese. OR FOUR. Don’t let some stupid recipe tell you how much cheese is enough – that’s your decision dammit. Once you have added the appropriate amount of cheese, return the casserole to the oven and bake until the cheese is golden brown and bubbly, say 5 or 10 minutes.

Serve with a nice… Actually, you know what? Screw the side dishes. This has everything in it already. Just eat it!

Trailer trash heaven on a plate.

Preheat oven to 375 degrees F. Sauté onion in butter and olive oil, add ground beef/turkey and cook until browned. Stir in cream of chicken soup, salt and pepper to taste, and spread evenly in the bottom of a 9×13 baking dish. Top with frozen Tater Tots and bake for 30 minutes or until Tater Tots are golden brown. Remove casserole from oven, top with cheese, and return to oven for 10 minutes or until cheese is melted and bubbly.